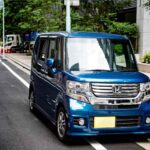 The Japanese obey the rules and the law.

Sometimes even nonsensical rules are obeyed.
The reason is the rules.

There is a national character that everyone thinks is right.
In addition, tax is preferential, so ride a 660cc car.
Japan has a small land area, narrow roads, and good pavement, so even a light car with small tires will not hinder your life.
Not possible in America.
The land is large, and it is dangerous if the speed is not about 100-150km.

However, it is impossible to be safety , so mini car cannot be exported overseas.
However, it is popular in Japan because the tax is about $70 and normal car is more than $300.

so that mini car is popular in Japan.

To be honest, fuel efficiency is also poor. At 660cc, there is no torque, so the engine speed increases and fuel consumption is higher than at 1300CC. The fuel efficiency seems to be good because the weight of the car is light.
It is dangerous and unreasonable from the sight of carbon dioxide emissions.
But there is no change.

Japan will not change what it has decided once. Unless there is foreign pressure.

This is similar to the Jews.
They have a messianic idea.

The messianic thought waits for the arrival of the messiah in units of 500 to 1000 years, but the Japanese have something similar to that. They will not change what I have decided once.

This was common in industries until 1990.

In the field of CDs and chemical fibers, Japanese companies will continue their research even if they have not achieved results for 10 to 20 years.
Honda’s Asimo robot has also been researched for over 20 years.
However, the United States and China are outstanding in terms of making good use of what has been put into practical use over many years.

In the United States, tanks and military aircraft have also been unmanned, and even humanoid robots, which were initially at the forefront, are catching up.
A four-legged robot has also been developed for military use, surpassing Japan.

AI self-driving taxis have been put into practical use in China and are running in Shenzhen.
Isn’t it difficult for about 50 years in Japan due to legal regulations?

How should we develop our business in consideration of such peculiarities of Japan?

We’ll talk about this on another occasion.